Unless we roll over pretty

Unless we roll over pretty shortly, looks like a stick save on that 15 minute SPX chart.

thx, that's what I thought.

thx, that's what I thought.

Matt (or others): on that

Matt (or others): on that 15 min chart, a gap down means we open below the main body of Friday's candle,  correct?

Is this trade confirmed then?

Is this trade confirmed then? I haven't seen an email after you posted.

"December’s first trading day has been bearish for S&P 500 and Russell 1000 over the last 21 years. A modest rally through the fifth or sixth trading day also has fizzled going into mid-month. It is around this point that holiday cheer tends to kick in and propel the indexes higher with a pause near month-end.

The “Santa Claus Rally” begins on the open on December 23 and lasts until the second trading day of 2023. Average S&P 500 gains over this seven trading-day range since 1969 are a respectable 1.3%. " 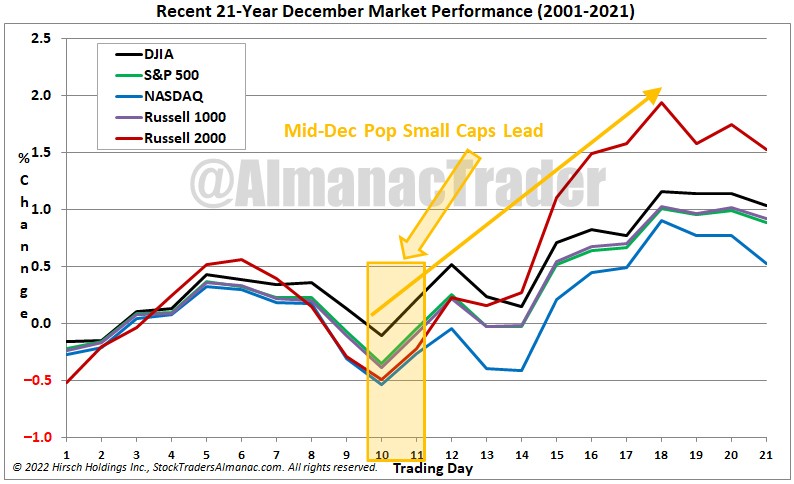 The Dow hasn't regained the

The Dow hasn't regained the 9ema.

Could also be a flag.

Could also be a flag.

Matt, on the SPY system

Matt, on the SPY system trade, any chance of a momentum-based hold beyond the short term MA which usually triggers the trade to be closed?

DJIA isn't far from the

DJIA isn't far from the 9ema, and there's a gap just below that.

PYPL - the hammer from

PYPL - the hammer from Tuesday is playing out. So far stopped at the 38% fib + 9ema area. Dunno if it means much, but the open is the biggest 15 minute up volume bar since July 22nd.

And here's the 30 min with flag. Already broke out as I am typing.

Here's an hourly chart, with

Here's an hourly chart, with the symmetry move. So far just looks like it's pulling back on lighter volume to re-test the trend line.

Has anyone tried TradingView for day trading intraday charts? They ...

TSLA wedging on the daily

EXTR sold too early! Another

EXTR sold too early! Another case of bouncing off the 9ema repeatedly. The hourly chart gave a

BTU starting to pick up

BTU starting to pick up some steam? (1hr chart)

Halloween may not be over

Halloween may not be over for Bitcoin!